I have two news items to share today.  One is the link to the recorded version of the presentation I did about Disability Servitude at CUNY two weeks ago and the other features Hillary Clinton talking about eliminating the sub-minimum wage an article in the Atlantic.  I hope you find both of them informative and helpful in your advocacy efforts for wage equity for all workers with disabilities. 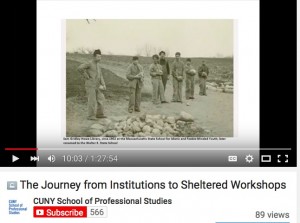 Click Here For Article On Clinton and Sub-Minimum Wage 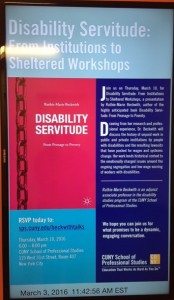 The wonderful team at CUNY interviewed me yesterday and posted it on the CUNY School of Professional Studies Facebook page.  You can check it out at:

Less than six days to go before the big launch party being hosted by CUNY in New York City.  We are flying up from Nashville on Tuesday so we can have a little fun along with some college professor work.

I’m working  away or maybe that’s awry on my presentation for Thursday night.  We’ll see how it shapes up during rehearsals.  Hope to see some of my old and new friends and supporters there.  CUNY has also arranged for a live webinar broadcast for folks who can’t make it to the presentation in person.

We’ve going to raffle off two copies of Disability Servitude for two lucky participants and will have discount coupons available for all who attend either way.  I’m still pinching myself and trying to figure out what to wear.  Thank you to everyone who has helped to make this possible.

There’s still space available for the webinar if you haven’t had a chance to sign up yet.  Just click on the link below:

Click here to register for the webinar on Disability Servitude 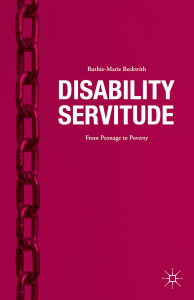 Disability Servitude, From Peonage to Poverty

On Thursday, March 10th, 2016, from 6 p.m. to 8 p.m., Ruthie-Marie Beckwith will present and respond to questions about her new book, Disability Servitude.

Drawing from both her research and her professional experience, Professor Beckwith will discuss the history of unpaid work in public and private institutions by people with disabilities and the resulting lawsuits that have pushed for wages and systemic change. Her work lends historical context to the emotionally charged issues around the ongoing segregation and low wage earning of workers with disabilities.

Her schedule of other book signings can be found on the author’s website, www.ruthiemariebeckwith.com

Ruthie-Marie Beckwith is an Adjunct Associate Professor in the Disability Studies program at the CUNY School of Professional Studies. She has been writing since she was in the sixth grade, not so long ago if her memory serves her right. Disability Servitude is her first non-fiction book. Her novel, Seven Days at Oak Valley, is a story close to her heart about the people who continue to inspire her with their courage, faith, and resiliency. She makes her home in Tennessee.

“Ophelia,” a poem that I submitted to a contest sponsored by Open Minds Quarterly received an honorable mention and was published in their Fall 2015 edition.  You can find it by going to:

This week I am working on reviewing the proof pages and  building an index for Disability Servitude. The deadline is December 11th, just far enough away to get it all done.

I also received word that a poem that I submitted to a poetry contest sponsored by Open Minds Quarterly received an Honorable Mention!  It will be published in their 2015 fall edition. You can be on the look out for it here:

The house building project is coming along, too.  We hope to have it done by Labor Day, 2016.  Stay tuned for the Open House of the Century invitation!

So maybe I can start out with a good news of the year so far list and see if it will take on a life of its own.

Maybe it will self-replicate and I will have exponentially long lists of good news gathering in piles across my floor with the dust bunnies that rarely get any attention.  So here goes:

That’s what’s fit for print right now.  Hopefully there will be much, much more to follow.

It’s official.  Palgrave/MacMillan has accepted my next book, Disability Servitude: From Peonage to Poverty for publication!

Here’s a bit of the overview:

For well over a century, institutional peonage held individuals with intellectual, along with a host of other disabilities, in thrall to the maintenance and operation of the nation’s public institutions. By 1972, residents accounted for 47,000 workers in the institutions for individuals with intellectual disabilities alone. Resident workers shoveled coal; labored in the fields; worked in the laundry; cooked and served meals in the dining halls; scrubbed and cleaned throughout the facilities; and provided direct care for fellow residents. Resident workers drove tractors, ran machinery, and even fought forest fires. They did all these things and more—all unpaid—an invisible workforce that labored for ten to twelve hours a day, seven days a week. Five years later, it all came to a grinding halt.

Beginning in the early 1970s, residents in institutional settings from across the country brought a number of lawsuits with Thirteenth Amendment claims—asserting their right to be free from involuntary servitude. The Peonage Cases, along with a number of other significant legislative and litigation efforts, set the field on a new course of normalization and the expansion of community based services. In 1974, in the matter of Souder v. Brennan, the Federal District Court in D. C. ruled that, for the first time, the Fair Labor Standards Act as amended in 1966 applied to hospitals, including the public institutions. This meant that, for the first time, resident workers were to be paid minimum wage for the labor they performed.

Instead, states opted to cease their work programs and replace the resident workers with other non-disabled paid employees.

My final revised version is due on May 15th along with a permission to use an abundance of quotes from current and historical references.  I’m also teaching two Disability History classes for CUNY this spring.    And, there always weaving to take into consideration.  But, it does looks like I will be chained to my laptop for some time to come.

Sigh.  I’ll keep you posted on how it’s all coming along now that I’ve got my website access straightened back out.

It should come as no surprise that a spider web is used to symbolize mystery and intrigue as well as weaving.  After all,  they both have the properties of complexity and things that can be unravelled.

And yes, I’m hard at it again–weaving new plot lines for my second novel while simultaneously weaving textiles for my new house.

Right now I’m struggling to identify all of the loose ends that will need to be tied up by the end of the story.  Sub-plots, suspects, motives, and opportunities to learn more about Tony and Joey and their lives at Oak Valley.  More secrets to be discovered and revealed.   More murder and mayhem.  Much more darkness before the dawn, etc. etc. etc. 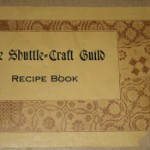 In a different chapter of my life, I have a blue and white, 10/2 perle cotton warp ready to put on my loom.  The pattern is for a wall hanging from the 1931 Mary Meigs Atwater’s  Shuttle-Craft Guild Recipe Book.  The “Recipe” is lovely and the adage is, “Weave Truth With Trust”.  The directions, however, leave a lot for interpretation.  Maybe this should be the title of the new book?  Hmm…

At any rate, one small disclosure for inquiring minds that want to know; events in the new book take place before the first.  (A.K.A a prequel.)  It isn’t the book that I planned to write next, but it is the one that the characters wanted and they almost always get what they want.

(This is a repost…my settings were off.  Thanks for your patience.) 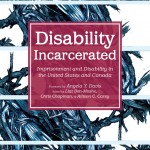 This afternoon the doorbell rang and there it was, sitting on the ramp to our front door–our very own copy of Disability Incarcerated!  I had to wait my turn to read the chapter that Mark Friedman and I wrote our work helping People First of Tennessee and Speaking for Ourselves with their Closing Institutions Campaigns: Self-Advocacy: The Emancipation Movement Led by People With Intellectual and Developmental Disabilities.  We felt honored to be asked to tell the story of the courage, vision and determination the leadership of those organizations demonstrated in the face of tremendous resistance and opposition.  Mark and I drew from our personal archives and other primary sources to recount as much of the history of their efforts as we could.  Copies of Disability Incarcerated are now available from Amazon as well as other online booksellers.