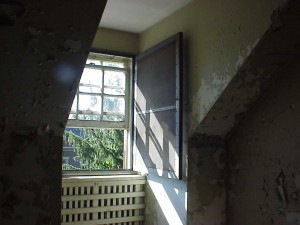 Imagine growing up in a place where people around you die on a regular basis, some from known and others from more mysterious causes. Such is the case for Anthony “Tony” Ervin, a young man with mental retardation who lives at the Oak Valley State Training School and Hospital. When, in 1979, the medical director is stabbed to death and maintenance man hung in his repair shop, Tony finds himself thrust into the role of amateur sleuth when no one appears to show concern for the maintenance man who filled the role of a surrogate father.

Viewed by those who run the institution as incompetent, Tony nonetheless discovers clues that lead to multiple suspects and motives. At first, Tony’s primary concern appears to be a quest for the perfect girl, one who will return both his emotional and physical attraction. The pursuit of these attractions lands him in the position of overhearing the Superintendent of Oak Valley and others discussing a crisis surrounding missing resident files. Thwarted in carrying out his intended clandestine rendezvous with an attractive young woman, Tony schemes with his roommate Joey about other means to achieve his objectives.

As Tony plunges into a week that will change his life, his movements as the mail boy for Oak Valley begin to have a profound impact on all whose path he crosses. The Superintendent, Winfred Thomas Jefferson, immerses himself in the search for the missing files and suspected larceny, all the while wondering whether his wife had an affair with the now deceased medical director. The Chief of Security, Mac Jones, threatens to have Tony’s prized status as the mail boy of Oak Valley revoked after Tony is found observing a late night theft of supplies occurring under his direction.

The next day, after completing his long mail delivery route, Tony finds that the missing files are in his possession. His curiosity leads him to look at what has caused such an uproar within Oak Valley’s administration and he finds that he has Joey’s file and that it has a seal labeled ‘radiation’ on the cover. Before he can share this with him, Joey is attacked and Tony finds his broken, but still breathing body, lying at the bottom of an isolated staircase.

With the violence escalating, Tony’s investigation hones in on the Superintendent and the menacing Chief of Security. He pieces together those clues he has gathered including his witnessing of the Superintendent cutting off the tip of one of his prized cigars with a pearl handled knife and tries unsuccessfully to explain his conclusions to the local sheriff. Intrigued nonetheless by Tony’s efforts, the local sheriff revisits evidence taken from the medical director’s office that also points to Jefferson as the murderer. Jefferson is arrested, but not before Tony has been accused of the assault on his friend and is sent to the forensic unit of the state psychiatric hospital in Nashville. It falls upon another close ally at Oak Valley to find a way to help Tony, but this necessitates his transfer to another state training school and hospital, far from his friends and the girl of his dreams.